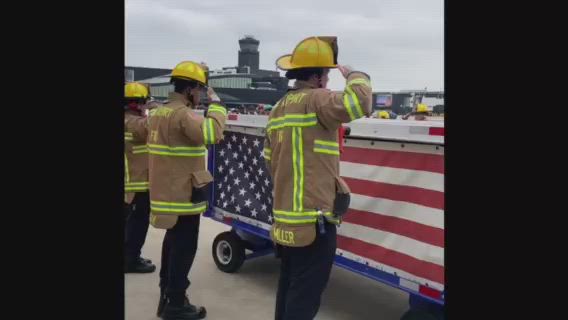 As the remains of a fallen U.S. Marine were loaded onto a plane one recent morning at BWI Thurgood Marshall Airport, travelers pressed their faces against the windows above and peered down at the tarmac.

There, dozens of members of the BWI family had lined up to salute the Marine, his casket draped in an American flag.

Over the next several minutes, the ceremony went off without a hitch – a water salute, honor guard, terminal announcement and other elements included.

“The event was as somber as it was important,” said MDOT Secretary Greg Slater.

Typically, MDTA Police, BWI Fire & Rescue and MDOT MAA employees get notified days in advance when a dignified transfer is going to take place. During these events, the remains of fallen service members are transferred between a plane and waiting vehicle, or vice versa.

On this spring morning, however, personnel received just a few hours’ notice.

MDTA Police Senior Officer Michael Dunn, who organizes the events, sprang into action. He quickly put out a notice, began gathering information on the Marine and set other pieces of the ceremony in place. Federal partners spread the word as well.

By the time the event began later that morning, dozens of members of the BWI family stood on the tarmac to honor the Marine.

“I was even surprised with the turnout,” Dunn said. “You would have thought I put out my normal two- or three-day notice.”

“There is no hesitation on our part to be involved,” said BWI Fire & Rescue Deputy Chief Steven Hess. “It’s an honor for us.”

While this Marine’s family wasn’t present for the ceremony, loved ones of fallen service members are often very appreciative to be honored by the BWI family, Hess said. For many fallen heroes, BWI Marshall is the last stop before Arlington National Cemetery.

“I can’t say enough how proud I am of the BWI family for coming together to honor this Marine,” Secretary Slater said. “Not only did you send off one of America’s heroes, but you represented MDOT and MDTA with dignity and respect.”